KTX to PNG in Python for iOS snapshots 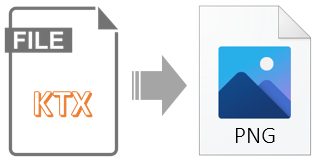 App snapshots on iOS are stored as KTX files, this is fairly well known at this point, thanks to the research by Geraldine Blay (@i_am_the_gia) and Alex Brignoni (@AlexisBrignoni) here and here. They even came up with a way to collect and convert them to PNG format. However that solution was only for macOS, and hence this research..

KTX is a file format used to store textures, and used commonly by OpenGL programs. The KTX file format is known and available here. There aren't many standalone utilities that work with KTX files, as it is mostly used in games and not for reading/distributing standalone textures. There are also no readily available python libraries to read it! The Khronos group that created the format distributes libktx, but it is C++ only. Even so, it would not be able to read iOS created ktx files (read on for the reasons mentioned below). The few Windows applications I could find like PicoPixel would not recognize Apple created KTX files as valid files.

So what is different here? A quick glance over the file in the hex editor showed that the texture data was stored in LZFSE compressed form, which currently only macOS/iOS can read.


Now using pyliblzfse, I could decompress the data, and recreate a new KTX file with raw texture data. Even so, it would not render with KTX viewers other than macOS's Finder/Quickview and Preview. So I tried a few different approaches to get to the data.

Textures are different from 2D images and there is hence not a direct conversion from a textures to an image format. From available research, it seemed like the easiest way to do this would be to use OpenGL to render the texture data (extracted from the KTX file), then use OpenGL to save a 2D image of the rendered image. There is some sample code available too on the internet, but in order to get it to work, one would need to know how to use OpenGL to render textures, a learning curve that was too steep for me..

After spending several hours trying to get this to work in Python, I ultimately gave up as python is not the platform where major OpenGL development takes place, therefore there is little to no support, and libraries are platform dependent. I barely got one of the libraries to install correctly in Linux, and every step of the way I got more errors than I wanted to debug, ultimately I threw in the towel.

Reading the KTX file header, the glInternalFormat value field from the header is 0x93B0 for all iOS produced KTX files (as seen in screenshot above). This value is the enumeration for COMPRESSED_RGBA_ASTC_4x4. So now we know the format is ASTC, which is Adaptive Scalable Texture Compression, a lossy compressed format for storing texture data, and uses a block size of 4x4 pixels. That simplifies our task to now finding a way to convert ASTC data to raw image data. A bit of searching led me to the python library astc_decomp which does precisely that. So what I needed now was to put the pieces together as follows:


Combining this together, we are able to create a python script that can convert KTX files to PNG files. Get it here:
https://github.com/ydkhatri/MacForensics/tree/master/IOS_KTX_TO_PNG

There is also a windows compiled executable there if you need to do this on windows without python. Alex Brignoni was helpful in sending me samples of KTX files to work with from multiple images. The code also works with KTX files that are not really KTX, ie, they have the .ktx extension but the header is 'AAPL'. The format is however similar and my code will parse them out too. If you do come across a file that does not work, send it to me and I can take a look.

A point to note is that not all KTX files use the COMPRESSED_RGBA_ASTC_4x4 format, only the iOS created ones do. So you may come across many KTX files deployed or shipped with apps that can't be parsed with this tool, as it only handles ASTC 4x4 format.