This post is about entries created when devices (USB or other) are connected to a Windows 8 system. This post does not talk about Windows Event log basics, its format or parsers or where you can find them on a system. I assume you are here because you already know about that and simply want to know about USB artifacts in event logs on Windows 8.

Windows 8 has added many new Logs and Sources to its core Event Logging system. Entries for device connections (insertions) are seen in at least 5 logs:


Comment: Chad Tilbury alerted me to this one. Chad notes that this entry is only seen if “Audit Removable Storage” auditing is configured within the Object Access category of the Advanced Audit Policy Configuration.

The comments on occurrence are based on my limited experimentation/research with a Windows 8.1 system over the last few days. Please let me if you are seeing any other activity or behavior or log entries.
Posted by Yogesh Khatri at 12:34 PM 5 comments 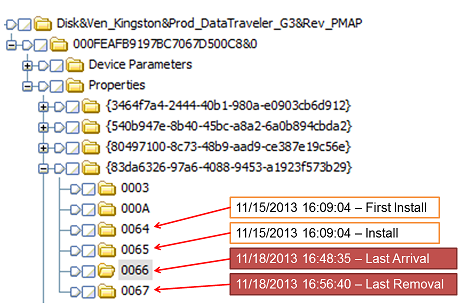